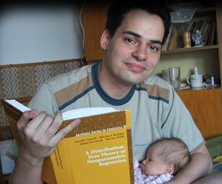 Barnabás' research interests lie in the theoretical questions of statistics and their applications to machine learning, computer vision, astronomy, and bioinformatics.

After working as an assistant professor at the Eotvos Lorand university, he moved to Edmonton, Canada and conducted research from 2007 through 2010 as a postdoctoral fellow at the Alberta Ingenuity Centre for Machine Learning.

From 2010 to May 2012 he was a postdoctoral fellow at the Auton Lab, Robotics Institute, Carnegie Mellon University.