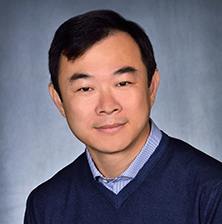 Eric Xing is a Professor of Machine Learning in the School of Computer Science at Carnegie Mellon University, and Founding Director of the CMU/UPMC Center for Machine Learning and Health. Dr. Xing has just been elected as a Fellow of the Association for the Advancement of Artificial Intelligence. AAAI will celebrate the newly elected Fellows at a dinner during AAAI-16 in Phoenix, Arizona on February 14, 2016.

The Association for the Advancement of Artificial Intelligence's Fellows program was started in 1990 to recognize individuals who have made significant, sustained contributions---usually over at least a ten-year period to the field of artificial intelligence.

Professor Xing received a Ph.D. in Molecular Biology from Rutgers University, and another Ph.D. in Computer Science from UC Berkeley. His current work involves, 1) foundations of statistical learning, including theory and algorithms for estimating time/space varying-coefficient models, sparse structured input/output models, and nonparametric Bayesian models; 2) framework for paralellel machine learning on big data with big model in distributed systems or in the cloud; 3) computational and statistical analysis of gene regulation, genetic variation, and disease associations; and 4) application of statistical learning in social networks, data mining, and vision.